Today at Chase Boehner Erotica the Hot New Release Shades of Shame is here for a fun and exciting guest post. Check out the cover, the exciting excerpts, and then enter the rafflecopter contest!! Cheers, Chase


Christopher and I are from the coastal area of South Carolina, what the locals would call the ‘lowcountry.’  We live a quiet life nestled just outside of Charleston with our eighteen dogs and one cat (Jenny), who thinks she’s a dog.


Chris and I started writing short stories for each several years ago.  As time passed, our stories got a little longer, and one might say a little more developed.  With Christopher’s support, I was able to dedicate my time fully to writing, and with his help published my first book in 2010.


Our focus now is developing a more complete storyline filled with rich, robust characters.  Concentrating on character development, scene development, and storyline development has been both challenging and rewarding.  Most of all, the ability to work with someone who understands constructive criticism has hopefully made us both better writers with each attempt.


We love to get emails, and we’re working on a blog site where we can post some spoilers and such.  We check into facebook periodically, and need to get back onto my blogs backpocketbeer.blogspot.com and laurabcooper.blogspot.com, so look us up!  Or contact us at christophercooper67@gmail.com or lbcooper123@gmail.com!


To the average eye this Washington D.C. power couple seems to have it all:  power, money, status.  What they really have is a firm grip on the image they portray.  However, like most couples in this social circle, they live very different lives behind closed doors.


David and Elise McNarry are a seasoned, political couple, and they understand the importance of appearance. They also understand that their relationship is based on love, not sex.  And while they’re still both madly in love with one another, they have grown apart over the years.


Facing the consequences of exposure, their chief political strategist and friend Patricia Johnson comes up with a plan to put out the fires before the media can fan the flames.  But when things don’t go as planned, it’s more than feelings that are at stake.

Excerpt  1 from Shades of Shame


Most men would have been all over her by now.  Logan was taking his time, forcing her to wonder if he had any interest in her.   He was sweet, attentive, and sexy.  She could definitely see herself pushing him down and riding him like a cowgirl.  For the moment she was dragging him into the den and onto her overstuffed leather couch.  He chuckled slightly as their eyes met, and Leila began to giggle once again.  She couldn’t help it, and before she knew it they were laughing out loud as hard as they could.  She was comfortable, his heavy warm arm around her neck, but she wanted more.  She wiped her eyes as the tears began to form at the outer corners of her eyes.  He wiped her face, and there they were:  frozen.  Seconds later, their lips met once again.


This time he was a little more forceful, but still a long way away from the type of lover she liked.  She pressed her lips into him, harder as his tongue ran across her lips.  His hand moved to her breast, and she grabbed his wrist and pulled his hand down her stomach and between her legs.  He clumsily fumbled around her crotch like an inexperienced school boy touching a woman for the first time.  She could see she was going to have to take matters into her own hands, so to speak.


Shivers scrambled down her spine the second her fingertips touched his skin, and she pushed his button down shirt even further open as her palm slid across his chest.  Enormous, she thought as she bent down to kiss his skin.  Her lips were on fire, matched only by her lust as she took a deep breath and inhaled him.  I could get lost in this.  His hands finished unbuttoning his shirt as he pulled the tails out of his waistband, opening himself up for her.


He kissed the top of her head, nuzzling his nose into her hair and enjoying the attention he was getting.  She ran her hands across his stomach and into his crotch.  The pure heat rising gave way to the best surprise of the evening.  Her hands ran across the lump in his shorts, down the length as she marveled at its sheer size.  She fumbled with the lone button that held his shorts together, anxiously trying to free her prize.


She pushed him back against the couch, slid off the edge and crawled between his legs.  “Let’s just see what you’ve got here.”  She said it, and even she couldn’t believe the words flying out of her mouth.  But all that would be gone in seconds once she got his zipper down.  Holy crap, she thought as she reached inside his shorts.  Her hand felt the massive girth of his cock as she realized that her fingers couldn’t even wrap around it.  It was huge.  Easily the biggest one she’s ever held in her hand, or hands she thought.  Here she was thinking that he was all mushy, soft and sweet.  But this cock was definitely something to write home about.  She doubted it would even come close to fitting, but she was more than willing to give it the old ‘college try,’ so to speak.

Excerpt 2 from Shades of Shame

The phone stopped blinking and David McNarry lifted his head and his eyes narrowed in on her, “You were telling me what your type of man was.”


“Right.  My type.  You really want to know my type?”  Leila settled back into her chair and sipped her drink.


“I like a mature man, a little gray around the temples, and one that views his experience as an asset.  Someone who knows what they want, and isn’t afraid to do anything to get it.”  She watched him carefully to see his reaction.  Most people would have thought her words were too forward but David smiled slightly.  It was as if he expected those very words to flow from her shiny pink lips.


“Anything.  But most of all, someone who could take me as their own, not afraid to objectify me, and use me as they wished.”


“Sounds pretty daring.  Not much of a romantic, are we?”  This was clearly a test, she thought.  This was his way of seeing if I were serious.


“Not at all.  For one to be romantic, you must put more into lovemaking than I have the time or inclination for.  No, just give me the raw, carnal sex, and don’t hold back.  I like it…” she said with a whisper as she stood and approached him, “rough.”


The Senator cleared his throat, making a loud, obvious sound in order to convey not only his surprise, but his approval.  “I see where my son could fall short, now.  He’s just like his Mother:  a hopeless romantic.”


Leila walked around the back of his chair, trailing her hand across his chest and around his throat.  “I haven’t seen Logan in years, Senator, but I hear he’s still a good boy.  Good boys are nice, but they bore me.  If he knew what I was thinking right now, he’d be ashamed of both of us…”


“There are many shades of shame, my dear.  You just have to find the one you’re comfortable with,” his breath became heavier with her closeness.


“Exactly.  And you, sir?”  Leila ran her fingers through his hair, pulling his head back and forcing his gaze to the ceiling.  “What are you comfortable with?”


He let out a muffled laugh, faint, but audible enough to get his point across.  “I’m certain we could find a shade we’re both comfortable with.” 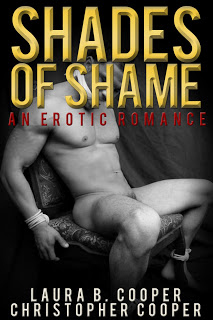 Check out Semper Fi at these purchase links:


Book Tour giveaway (5 winners get $10.00 for ebooks vendor of their choice)


review rafflecopter giveaway (2 winners $25.00 for ebook vendor for reviewing either Shades Of Shame or Semper Fi)